Mr Peter Schmitz has been appointed by Germany as their new EB member.

Mr Peter Schmitz, deputy-head of unit of the department for Research and International Relations of the German Ministry’s Directorate-General for Federal Trunk Roads, is CEDR’s new Executive Board member since 1st January 2021. He replaces Mr Roman Limbach. 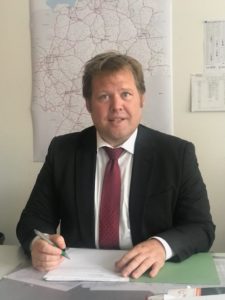 Peter Schmitz holds a master’s degree in civil engineering from Technical University of Aachen. He joined the civil service of North-Rhine Westphalia in 1998 holding various posts in the road administration and in the ministry of transport. He was seconded for 4 years to the European Commission and worked in the road safety unit of former DG TREN (Directorate-General for Energy and Transport). Peter did a one-year course at Ecole Nationale d’Administration (ENA) in Strasbourg/France, was awarded a diploma in public administration and then worked in international relations for North-Rhine Westphalia’s Minister-President for three years. In 2014, he joined the Federal Ministry of Transport.